To maintain overall consistency with your chosen holiday motif, why not also make skeleton-themed jack-o-lanterns too for this Halloween? According to historical accounts, the term “jack-o’-lantern” literally meant “man with a lantern” in 17th century Britain. On the other hand, it is also a popular nickname for will-o-the-wisp, those flickering lights usually seen at night over swamps, bogs and marshes which is a perfectly natural phenomenon but which we often like to associate with fairies, ghosts and the supernatural. The jack-o-lantern has recently become a favorite graphic representation for things Halloween.

According to one legend, the jack-o’-lantern took its name from an Irish scoundrel called Stingy Jack who tricked the Devil into promising him he wouldn’t have to go to hell for his sins. When Jack died, he found out he had been barred from heaven. When he knocked at the gates of hell to demand his due, he was also turned away. He was told the Devil kept his promise. Thus was Jack doomed to remain on earth and wander for all eternity with only an ember of hellfire, kept in a hollowed out turnip, to light his way. Since then, he became known as Jack O’Lantern. Also, folklore has it that having lighted turnips or pumpkins with curved scary faces or patterns, called jack-o-lanterns, was a way of protecting homes against vampires and ghouls. Superstitious people thought the light from jack-o-lanterns can be used to identify the undead, and that once their identity was revealed, it was held that they would be forced to give up their hunt for prey. 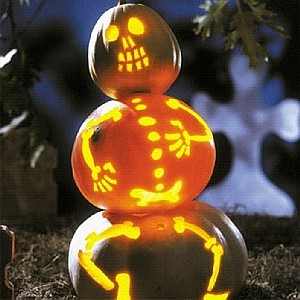 In 19th century Britain, people made their jack-o-lanterns originally from turnips or beets. When the practice spread to North America, pumpkins came to be used instead. A pumpkin is usually cut into sections, with holes curved in to depict a face. In some instance, symbols and logos are depicted instead of the typical face. Printed stencils are often used as a guide for the more complex designs. For your skeleton-theme, you can find some free printable spooky skeleton stencils from Better Homes and Gardens or you can buy some original designs from The Pumpkin Lady. Of course, you can also make your own stencils as you draw inspiration from the pictures you can readily find with Google’s image search. After carving, a light source, traditionally a candle, is placed inside the pumpkin before the top is put back into place. The light is normally inserted to illuminate the design from the inside.

Here is a step-by-step instruction from CreativeBug on how to carve a pumpkin:

1. Select a fresh pumpkin in a shape that pleases you. Some folks prefer their pumpkins low and round, while others like them tall and oval-shaped.

2. Draw a circle or hexagon on top of the pumpkin in preparation for making an opening large enough for your hand to reach through.

3. Cut through the stem end of the pumpkin along your outline with a sharp knife or pumpkin-carving tool. Use a back-and-forth slicing motion to cut through the thick, tough skin. 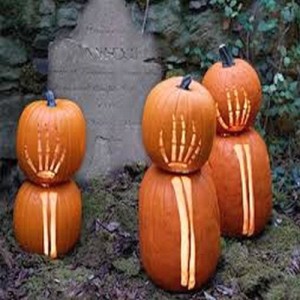 4. Remove the stem end, which will act as a cap, making sure you scrape off any seeds or pulp.

5. Use a large spoon to scoop out the seeds and pulp from inside the pumpkin. Hold the spoon by its bowl to get extra leverage while scooping.

6. Draw a pattern for the face on the clean pumpkin with a felt-tip pen, or scribe the lines into the skin using a pencil. Be sure to make the eyes, nose and mouth large enough; you’ll have a hard time cutting out tiny features when you’re using a big knife blade to saw through tough skin.

7. Follow your pattern as you cut all the way through the pumpkin.

8. Push the cut-out features gently from the inside of the pumpkin and discard the pieces.

9. Place a votive candle inside the pumpkin to create an eerie glow.

Nowadays, jack-o-lanterns can also be fashioned from papier mache or Styrofoam. Moreover, instead of candles, illumination can be done using battery-powered portable lamps. Of course, the downside here is you may not get to make and enjoy pumpkin pie or pumpkin soup with your traditional Halloween dinner.