Game of the Redback Spider

Game of the Redback Spider

The Fatal Game of the Redback Spider

If you’re familiar with the Black Widow, the famous and venomous spiders which would probably scare you out of your wits just by being near them- then you’d feel the same way with Red Back spiders. Indigenous to Australia, these spiders are quite common and while they are prey to larger spiders, when provoked they can easily defend and turn predators themselves.

Red Back Spiders are extremely venomous and deadly. In Australia, they’re considered one of the most dangerous animals you must be wary of. They’re everywhere- in fact they may be lurking under your chairs now. Imagine them: little hairy, eight-legged creatures which will crawl over you without hesitation. Yet although since 1956 no death has been registered in Australia which was due to spider bite, each year it registers more than 2,000 cases of Red Back Spider bites.

Red Backs belong to the widow family, and are a close relative to the Black Widow. They look similar in many aspects, but a closer look will reveal the difference.

How to spot and recognize one?

Perhaps the most famous characteristic of Red Back female spiders is its the red (or orange) stripes you see on the upper part globular abdomen and an hourglass shape mark in the lower area. But, not every Red Back spider has this. The younger females could have smaller whitish markings too, aside from having brown to black abdomen. Males are lighter brown in color, with whitish coloring and an hourglass-shape on one side of its abdomen. Females are around 0.4 inch big, typically larger than males which are only around 0.12-0.16 inch. They have fangs and piercing jaws. Attached to these are the venom glands.

Female Red Back bites are more noxious. If you do get bitten by you’ll experience intense pain and swelling around the area. A burning sensation and sweating of the affected part then follows. This is a general reaction though. Some may have different reactions. In any case, it’s highly recommended that you seek medical help as soon as possible. You may not see the bite mark, but it’s there and the venom could already be spreading. Antivenoms are available for use in medical facilities.

Other Characteristics of Red Backs 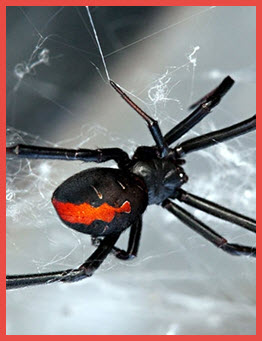 Diet: Sightings show that Red Backs feed on a diet of small insects like other spiders, small lizard, ants, crickets and even young mice. On one rare occasion it was seen fighting and winning over a snake. During lean times, they can live for up to 100-300 days without food.

Reproduction: Male Red Backs leave their mother’s web to search for a female, using pheromones to assess the capability of the female. These creatures practice sexual cannibalism, wherein the smaller male Red Back is eaten by the bigger female during mating. The sperm is then stored in the female’s spermathecae and will be utilized to fertilize eggs over a period of 2 years.

Life Span: Male Red Backs mature earlier than females, at roughly 45-90 days. Females mature in about 75-120 days. In consequence, males have shorter life span at around 6 months only and usually eaten by females in what is known as sexual cannibalism, while females can live up to 3 years.

They are all over Australia, and there’s news that says it’s reached Japan and UK as well, killing one man with a bite that caused massive internal bleeding. Red Backs are small 8-legged arthropods that walk the earth, lurk under your beds,  pillows, inside your closets, cabinets or air conditioning units. Sometimes they’re called toilet spiders- yes, they love your toilets seats. Outside your house you could find them in your garden, sheds, or spinning a web in your hammocks. Look for them in crevices and holes, because what’s scarier is they seem to like living in hot, sheltered places that are near to food source. Red Backs are tough: they can survive temperature ranging from 40 degrees Celsius down to below freezing point.

You wouldn’t want to mess with Red Back spiders. They are a real mess and quite literally at that. Their webs are unpleasant to look at. Red Backs are known for their sticky and thick threads, which actually serves its functions when they’re on with their game. It also ensures that their egg sacks, which they have in plenty, are placed safely at the back area of their webs. As part of their defense strategy, Red Backs create their webs with triggers. And the whole web is actually a huge trap.

When a lone, unsuspecting insect like a Bull Ant comes across Red Back’s territory, vibrations are sent throughout the web and the latter sees opportunity for food. So what will it do? It’ll lurk (just as it lurked for you), and wait. As soon as it has the upper hand, the attack ensues, with the poor visitor at a disadvantage- they’ll find it hard to move their limbs. This is the perfect time for Red Backs to do what they do best. Using their long slender legs, they’ll roll over the helpless victim in web until it is killed. This is the reality for Red Back Spiders. When instinct tells them they are in danger, they respond to it accordingly.