A spider’s web is made of silk which has a tensile strength that is greater than steel of the same weight. However, spider silk is obviously much more elastic than steel. It is also found rich in vitamin K which helps in clotting blood and stopping bleeding. Because of these properties, scientists are now trying to discover ways of recreating spider silk in their lab for possible industrial and medical use in the future.

But how do spiders make web? Spiders have silk glands which secrete a quick drying liquid silk material that is spun into web threads by their spinnerets. These spinnerets at the tip of their abdomen are special organs that allow spiders to weave different kinds of web threads – sticky or not, thick or thin, smooth or beaded. There are seven known types of spinnerets, each with its own genetic blueprint for making web threads. No spider possess all seven kinds of spinnerets. Most have only three pairs of spinnerets.

Different kinds of webs can be made with the silk web threads – orb webs, tangle webs, sheet webs, funnel webs, tubular webs or tent webs. The actual kind of web that a spider makes will however depend on the particular species of that spider. For instance, orb-weaver spiders (Araneidae) will weave spiral orb webs while Hexathelidae spiders will make funnel webs. Spiders have also been known to sometimes congregate and together build giant communal webs. The world’s biggest spider web, spanning more than 80 feet across a river in Madagascar, was made by a community of Darwin’s bark spiders.

But why do spiders make webs? The most important reason is, they use it to catch their food. After spinning a web, a spider waits until a prey is stuck, entangled or otherwise caught in the mass of silken threads.

Then it paralyzes or kills the catch with its venom before sucking it dry of life. Not all spiders weave elaborate webs to ensnare their prey. A net-casting spider can make a small net which it holds in its forelegs and throws at its target dinner. A bolas spider on the other hand catches its meal by swinging a web line with a sticky blob of silk at the end much like a fisherman snagging a fish with a hook. Then again, there are some spiders which do not use their web-spinning ability at all. The wolf spider, for instance, just runs after its prey in open chase like the wolf it is named after. 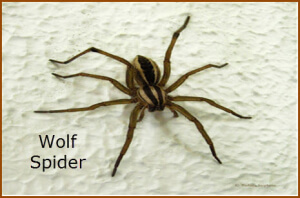 Spiders have to use protein to make the silk they weave into webs. Because it is very expensive energy-wise to build, spiders usually recycle their unused webs by eating them