Now for a bit of trivia. A pirate flag is commonly called the ‘Jolly Roger’ and it consists of a human skull above two long bones crossing each other on a plain black field. According to historians, pirates raise the Jolly Roger to frighten their intended victims into surrendering without putting up a fight since the message it conveyed was that, as outlaws, they were not bound by the normal rules of engagement. Mostly however, plain black flags were often employed by most pirates in the 17th-18th century. The reason the flag was flown was to frighten pirates’ victims into surrendering without a fight, since it conveyed the message that the attackers were outlaws who would not consider themselves bound by the usual rules of engagement — and might, therefore, slaughter those they defeated.

From Wikipedia
“The flag most commonly identified as the Jolly Roger today, the skull and crossbones symbol on a black flag, was used during the 1710s by a number of pirate captains including “Black Sam” Bellamy, Edward England, and John Taylor and it went on to become the most commonly used pirate flag during the 1720s.” 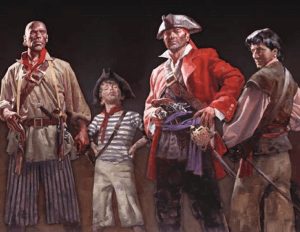 Little girls typically like to dress up as princesses or fairies for Halloween.

Boys on the other hand are often partial to putting on a pirate-inspired getup. Attired as Captain Hook or as Jack Sparrow, they imagine themselves free, unfettered by rules and authority, swashbucklers in search of adventure.