Mysterious Cats! Where did they get their reputation? 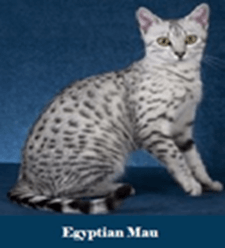 Human and cat relations go back a fairly long time.  Domestication probably began about 10,000 years ago (8000 B.C.E.) in the Middle East, from Near Eastern wildcats.  In China circa 5500 B.C.E., the domestication of leopard cats was underway, but it disappeared in favor of the Middle Eastern variety of cat that we have today.

You probably know that circa 4,000 years ago, in ancient Egypt, cats were considered sacred, and in point of fact, one of the ancient gods of Egypt (named Bast) had the head of a cat.  That’s not unusual since a lot of their gods were animalistic in nature.

How did that relationship arise?

Interestingly enough, both dogs and cats share a similar story.  Wolves used to skulk around the edges of campsites set up by nomadic humans, keeping other predators away, while they picked up scraps from the tribe.  The pack got food, and the tribe acquired protection.

In the same way, opportunistic and enterprising feral cats would patrol the granaries in Egypt, killing snakes and rats that were attracted to the food source (rats to grain; snakes to rats).  This helped to prevent famine, and the Egyptians came to believe that the cats had been sent by the gods to protect them.  If a cat deigned to live with you in your home, it was considered a blessing, but you couldn’t force them to stay since they were agents of the gods.

How did cats become “evil”?

There used to be a white moth in Britain that over the course of about 15 or 20 years turned black.  As more and more people started burning coal in the 1800s, a layer of black soot built up on everything.  That included buildings, tree trunks—literally everything had a fine black coating.  White moths were being decimated by birds, so they changed color to hide amongst the filth, and their population rose again. 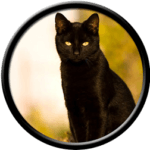 Cats changed their colors, too.  Some were crossbred by cat fanciers to create specific patterns and colors.  Feral cats developed patterns and colors that helped them hunt.  Cats are crepuscular hunters, meaning that they hunt at dawn or dusk, so the evolution of a black coat made them more effective hunters.

Unfortunately, it also made them hard for humans to see them.  A black cat might suddenly dart out in front of you, chasing its prey, and give you an awful fright.  Maybe you dropped a bag of grain, or your horse threw you off, or you had “an accident”.  Whatever the result, black cats were thus associated with bad things.  If one crossed your path, it seemed very likely that some misfortune would befall you.

In the middle of the 1300s, Bubonic Plague was sweeping across Asia toward Europe.  Ill-educated and superstitions people thought that it was the cats which were responsible for bringing this horrible disease.

Once Bubonic Plague bacteria got into the blood it became Septicemic Plague, causing gangrene, from which the skin began to turn black from internal hemorrhaging. 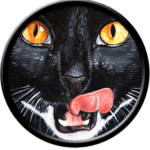 Black Death = Black Cats in their simple logic, so they started killing black cats, then all cats, just to be sure.

Little did they know that the plague was actually being carried by gerbils from Eastern Asia.  For centuries we believed that it was carried by the fleas on black rats, but as it turns out, the fleas carrying the bacterium were actually hitching a ride on this much smaller rodent.

If people had bred more cats, it’s quite likely that the death toll of 25,000,000 could have been dramatically reduced.  Cats would have happily continued to kill off the carriers.  Bubonic plague has still not been completely eradicated as a disease; we still get 1,000-2,000 cases per year. 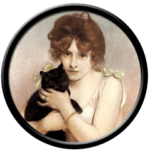 Unmarried women, frequently unable to find employment, resorted to building a home in the forest where they could clear a bit of ground and raise a few vegetables. Many became herbalists, making potions, tinctures, and salves that helped people sleep, reduced pain, or were helpful in other ways (love potions).  The church of the day, however, didn’t like people going to these wood-witches and became resentful.  Despite the fact that many of their potions and cures actually worked, the church preferred it if people came in and prayed to god for relief of their ills.

It also didn’t help that these women would make friends with local wildlife.  A feral cat (generally black) was a common companion.  It wasn’t too hard for zealots to convince people that the cats were “familiars” by which these witches spoke with Satan.  A lot of these genuinely helpful “proto-doctors” were subjected to ghastly torture because of these “evil” cats. 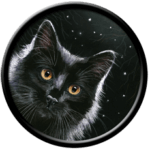 Superstitions of any kind are silly.  In our modern civilized world intelligent people know that superstitions are not real.  Of course if you shouldn’t walk under a ladder when someone above you is painting; they might drip on your clothing, or drop a bucket on your head.  This isn’t a case of karma or dharma; it’s a case of common sense.

As far as cats are concerned, people find them mysterious because they don’t react as we expect.  That is because we are simians, and they are felines.  Facial signals between us are often opposite.

Specifically, among simians, such as orangutans, apes, gorillas, monkeys, and humans, when you squint or narrow your eyes, that sends a message of suspicion, anger, or hostility.  When you show your eyes wide open, other simians see it as friendliness.

Felines are exactly the opposite. Cats see wide open eyes as a threat; it is a very aggressive gesture.  On the other hand, closed, or nearly-closed eyes, show a calmness, or acceptance. 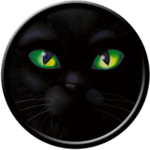 Did you ever wonder why cats tend to come very deliberately to people that don’t like cats?  And why don’t they run to someone who expresses enthusiasm?

We may squint at them and think “Stay away from me, you damned cat”, but they read the squint as calm acceptance and come over to socialize.

If you open your eyes wide and say “Who’s a pretty kitty?” they see your friendly expression as a threat and stay away from you.

Cats are not intrinsically evil.  Just remember that not very far beneath the surface of the domestic cat is a feral hunter.  They have a lot more “wild” in them than we think, and they could survive without us.  Just be like an Egyptian and be satisfied that they have elected to live with you.