Ravens and Crows, Demons of Death

Ravens and Crows, Demons of Death

Ravens and Crows, But We’re the Good Guys!

It’s terrible to get a bad reputation, especially when, back in Greece and Rome, you were originally a Messenger for the god Apollo. Ravens were Apollo’s minions for communicating with the mortal realm. Even in Biblical times ravens are an example of God’s gracious provision for all his creatures in Psalm 147:9 and Job 38:41. And later, in the New Testament, they are again mentioned by Jesus as an illustration of God’s provision in Luke 12:24.) So how did they get to be the “Bad Guys”? 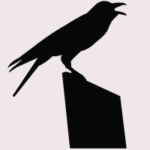 Incredibly, they seem to have gotten that reputation because they’re so smart. Not many people would argue with that, especially if they know anything about the “Crow Family”, which is the genus Corvus, including the jackdaws, rooks, crows, and ravens.

Ravens were smart enough to know that when humans were marching in a big convoy to meet an army on a field of battle, there were going to be dead bodies around, and that is a raven’s favorite food.

Equally useful (and despised) is the much maligned seagull, along with other ocean-going birds, that eat the dead fish that wash up on our shores.Without these natural scavengers we would be surrounded by the rotting bodies of small and large dead animals that hadn’t decomposed yet. In Canada, for example, it is illegal to kill a seagull because of the important role they play in the ecosystem.

The ravens were smart enough to realize that there were soon going to be bodies (free food) because of the way the humans were acting. This made soldiers think that if they saw a raven before the battle that their army was going to be defeated, so they were thought of as bad omens.

Ravens recovered a lot of their good reputation in this time period. In the year 380 C.E., Saint Vincent of Saragossa’s body was protected (after his execution) by a flock of Ravens, against wild animals, until his followers could recover it. It was then placed in a shrine, and the ravens continued to guard it. When the body was exhumed in the year 1173, to be returned to Lisbon by sailing ship, ravens accompanied the relics, and then guarded the new burial place. There are other stories from that period.

Don’t believe it? Ravens are known to sit silently at the side of other dead ravens and silently mourn them. The regular tenant ravens of the Tower of London sat with the body of Anne Boleyn after she was executed by Henry VIII.

Those “Tower” ravens are protected by royal decree, and there is a royally appointed Raven Master that cares for them daily. He feeds them with 170 grams of raw meat, and blood soaked bird-biscuits every day. There are a number of stories as to why, but one of the most popular is the story of King Charles II, whose reign went from 1660–85. He felt that if the ravens ever left the Tower of London that it would crumble into dust, and the kingdom would be lost.

Why did the poet Poe have the raven say “Nevermore” in his poem THE RAVEN? Because he knew something that you may not know… Ravens can talk, in magnificent human voices, high or low. Have a look here at a Raven that has been a regular guest of humans for quite a while.

Not All Europeans Liked Ravens

On the other hand…

Several Native American tribes worshiped the raven as an independent deity, who had a role in the creation of the world. Like Apollo, the Viking god Odin was said to have ravens as messengers that surveilled the world and reported back to him. The Chinese believed that ravens manipulated the forest weather, making storms to warn travelers that the gods were going to pass by.

Ravens are pretty clever. They use gestures to communicate. If they want you, or another bird, to see something, they will point at it with their beak. If the object can be picked up, they will wave it around to get another bird’s attention. Previously only dolphins and primates were known to do this.

They can use tools to acquire food, another skill formerly limited to dolphins and primates (and otters). They like to steal fish from ice fishermen by pulling the line up with their beak, if it has any weight, then holding it with a foot while they pull up more, over and over until they get it to the surface and then eat it, leaving the fisherman to wonder what happened.

If there is some food they want, floating on water in a narrow container that they cannot reach, they will drop stones into the water to raise the level until they can reach what they want. They can easily figure out how to use a hooked stick to pull a morsel of food out of a narrow space.

If they find some carrion and there are other ravens in the area, they will lie down and play dead until the others move off. The other ravens think it is too dangerous to go near food that somehow killed a raven. If rock climbers are getting too close to their nest, they will drop rocks on the climbers to make them go away.
If they come across a carcass that they cannot break open themselves, they’ve been known to imitate larger predators to get them to come by and do the job for them. Once they have eaten, the raven gets the remainder for itself.

Imagine a raven howling like a wolf, or chattering like a fox. Deceptive little beasts, aren’t they?

Do you like to snowboard? How about crow-boarding? This video shows how they like to have fun (there are many of them). They’ve been known to tease other birds, and pull dog’s tails, then to fly away laughing. They can solve just about any problem, such as breaking into the treat supply for the cat or dog and then feeding them treats.

Ravens and Crows – The Takeaway

I guess life is going to be tough if you are an entirely black bird, which seems to shine in any source of light, whose dead black eyes can produce an unnerving stare, and who seems to look right into your soul. Especially if you have their wicked sense of humor—like playing dead lying on the ground waiting for you to pick them up and suddenly “coming to life” to scare you, biting a painful nip, to remind you who is in charge, and then flying off, laughing.

So are they evil? – or just so much smarter than we give them credit for?